Something is rotten in the state of Denmark.

Hamlet, Prince of Denmark, arrives home from university after the news that his beloved father, the king, has died.

He discovers that his mother Gertrude has swiftly married his uncle Claudius, and the two have been crowned the new King and Queen of Denmark. In the throes of grief and unable to comprehend these events, Hamlet is visited by the ghost of his father who informs him that he was murdered by Claudius, in order to assume his crown and queen.

The ghost orders Hamlet to take revenge, yet Hamlet is unable to take immediate action, crippled by indecision and his need for proof of Claudius’ guilt. While he gathers evidence, and being unable to trust others in the Danish court, Hamlet assumes an ‘antic disposition’ making him seem mad. Hamlet must reconcile his obligations to the state, his faith, his father, life, and death, before enacting his ultimate revenge.

Considered to be one of the greatest works in the English language, Hamlet is Shakespeare’s longest play, and the title role his largest part. Written at the turn of the 16th century, a time of great social upheaval and expansion of thought, the complex character of Hamlet exemplified the doubt, disillusionment and new challenges of the age.

Revenge his foul and most unnatural murder.

At Elsinore Castle in Denmark, a group of guards meet in the middle of the cold night. They say that they have seen a ghost that resembles the late King of Denmark, Old Hamlet, and have invited Horatio, a friend of the Prince, as a witness. The ghost of the late king appears to them at midnight, but will not speak to the terrified watchmen. Horatio says they must tell the late king’s son, Prince Hamlet, what they have seen.

In the Royal Court of Denmark, the new King, Claudius, explains that he has replaced his recently deceased brother and married the widowed Queen, Gertrude. Word arrives that Fortinbras, nephew of the aged King of Norway, is making plans to wage war to avenge his father, who lost land to Denmark.

Hamlet, the Prince of Denmark, and son of Old Hamlet and Gertrude, has returned from university in Wittenberg. In mourning and expecting his father’s funeral, Hamlet finds that his mother has remarried. He is outraged at her swift marriage to his uncle, and is reproached by both Claudius and Gertrude for continuing to mourn his late father.

We also meet the king’s adviser, Polonius, and his children, Ophelia and Laertes. Laertes is due to depart Denmark for France. Before he leaves, we learn that Ophelia has a romantic involvement with Hamlet, which her brother forbids she act on, insisting she maintain her modesty. After bidding his son farewell, Polonius also warns Ophelia about Hamlet, telling her not to trust his advances and says she must not spend any more time with him.

Horatio leads Hamlet to encounter the ghost of his late father, who reveals to Hamlet that he was murdered by his brother. Hamlet’s father’s ghost tells Hamlet to avenge him and take revenge on Claudius.

Something have you heard
Of Hamlet’s ‘transformation’…

Ophelia tells Polonius that Hamlet’s behaviour has become strange and erratic. Polonius believes that the source of Hamlet's bizarre behaviour must be due to Ophelia’s recent rejection of him, on her father’s advice. Polonius decides to tell Claudius and Gertrude about Hamlet, saying that he believes Hamlet is “mad” with love.

Claudius and Gertrude enlist Hamlet’s old school friends Rosencrantz and Guildenstern to talk to him, to see if they can find out what is wrong with him. Polonius reads letters from Hamlet to Ophelia to the King and Queen. They concoct a plan whereby Hamlet and Ophelia will be alone together, so they can spy and witness his interaction with her.

Hamlet approaches and Polonius asks Claudius and Gertrude to leave so he can speak with the Prince. Hamlet cannot resist teasing Polonius, who concludes that he must be mad. Rosencrantz and Guildenstern arrive and Hamlet is happy to see them. However when he challenges them on whether they are visiting of their own accord, or sent by the King and Queen, Rosencrantz and Guildenstern reluctantly admit they were sent to check on Hamlet.

A group of travelling players arrives and Hamlet asks them to perform for the court a play of his choosing, The Murder of Gonzago, and include an extra speech that he will write.

Oh, what a noble mind is here o'erthrown!

Claudius and Polonius order Ophelia to talk to Hamlet, while they hide and listen to their conversation. Hamlet arrives, musing on life and death (“To be, or not to be, that is the question...”). Ophelia tells Hamlet that she wishes to return to him some love tokens he has given her. He is aggressive and hurtful in response, saying that she should not have believed he ever loved her. Hamlet asks where her father is, and tells Ophelia to go to a nunnery to avoid any more sin. After Hamlet leaves, Ophelia believes that Hamlet really has lost his mind.

After giving the players some acting advice, Hamlet has them perform his chosen play which is about the murder of a king, so that he can witness Claudius’ reaction. When the scene of the king being murdered is performed, Claudius stands, orders the lights be lit, and leaves the room in a hurry. Hamlet feels that Claudius’ response and the look on his uncle’s face is the confirmation of guilt he was looking for.

Claudius orders Hamlet to go to England, accompanied by Rosencrantz and Guildenstern. Later, Hamlet catches Claudius seemingly at prayer, unaware of Hamlet, while he is talking about his guilt. Despite having the opportunity to kill Claudius, Hamlet decides not to murder him, because killing Claudius during an act of prayer would send his soul to heaven.

Gertrude and Polonius are talking about Hamlet when he visits Gertrude in her bedroom. Polonius quickly hides behind a curtain and Hamlet confronts his mother aggressively. She cries out for help, thinking Hamlet might harm her, and Polonius calls out for help in response. Hearing Polonius’ voice and without checking to see who it is, Hamlet stabs through the curtain, killing Polonius instantly.

Hamlet quickly disregards Polonius and continues speaking with Gertrude. He confronts her about her relationship with Claudius and urges her to think on her former husband. As their exchange becomes heated, the ghost of Old Hamlet appears. The ghost reminds Hamlet that he has been tasked with avenging his father’s murder, and he is losing his resolve. Gertrude, who cannot see the ghost, believes her son to be truly mad. Hamlet begs his mother to separate herself from Claudius. He tells his mother that he is being sent to England then leaves, taking the body of Polonius with him to hide within the castle.

One woe doth tread upon another’s heel,
So fast they follow.

Gertrude confesses to Claudius that Hamlet has killed Polonius. Claudius tasks Rosencrantz and Guildenstern with finding Polonius’ body, to no avail. Hamlet eventually tells Claudius the location of the body, before announcing his leave for England. Claudius has sent with Hamlet a secret request that he be killed on arrival, unbeknownst to Gertrude. Meanwhile, Fortinbras is marching on Denmark, and Hamlet stops to wonder at the effort people will make to gain so little.

After her father’s death, Ophelia grieves deeply and is behaving strangely. Horatio insists that Gertrude speak with her. Gertrude reluctantly agrees, and finds that Ophelia appears to have lost her mind, as if mad with grief. Ophelia sings, and in her words speaks of her father and brother.

Laertes returns to the Danish court, furious at the news of his father’s death. He discovers that Hamlet murdered Polonius and swears vengeance. Yet just as he is processing his anger, Ophelia enters in a trance-like state, singing, appearing mad. Claudius uses Polonius’ death and Ophelia’s madness to convince Laertes to join forces and take revenge on Hamlet. Word arrives that Hamlet has returned to Denmark. Laertes and Claudius concoct a plan for Laertes to kill Hamlet with a poisoned sword during a fencing duel. To ensure Hamlet’s death, Claudius plans to poison a goblet of wine and hand it to Hamlet, should he win early points in the duel. Just then, Gertrude enters and tells Laertes that Ophelia has drowned in a river.

The rest is silence.

In a graveyard, Hamlet and Horatio encounter a pair of gravediggers and hear of Ophelia’s death, just as her funeral is about to take place. Witnessing the ceremony, Hamlet lashes out at Laertes and declares that he truly loved Ophelia. Hamlet discloses to Horatio how he came to return from his voyage to England, after being set upon by pirates, and how he tricked Rosencrantz and Guildenstern into bearing a substitute letter demanding their own execution. Hamlet speaks to Horatio about death, and how one should be ready at any given moment to face their fate.

At the castle, the fencing match commences between Hamlet and Laertes. Hamlet appears to be winning, and so Claudius offers him the poisoned wine, but Hamlet refuses to drink it. Gertrude takes the poisoned wine instead and takes a sip in celebration of her son’s success in the duel so far, despite Claudius asking her not to drink it. Gertrude collapses soon after and tells Hamlet that the wine has been poisoned, just before her death.

Laertes succeeds in injuring Hamlet with the poisoned sword, and they continue to fight, with Hamlet wounding Laertes with the same sword in return. Realising his fate, Laertes reveals to Hamlet Claudius’ plan, and that Claudius is therefore responsible for Gertrude’s death. Hamlet attacks Claudius, stabbing him with the poisoned sword and forcing him to drink the poisoned wine. Claudius dies, and Laertes asks for Hamlet’s forgiveness before dying. Hamlet dies in the arms of Horatio, who he tasks with telling his story.

As Horatio sits amidst the tragic scene, Prince Fortinbras enters from Norway with ambassadors from England. They tell Horatio that Rosencrantz and Guildenstern have been put to death. Fortinbras says that he will take over the rule of Denmark, and orders Hamlet’s body to be taken away in the manner of an honoured soldier. 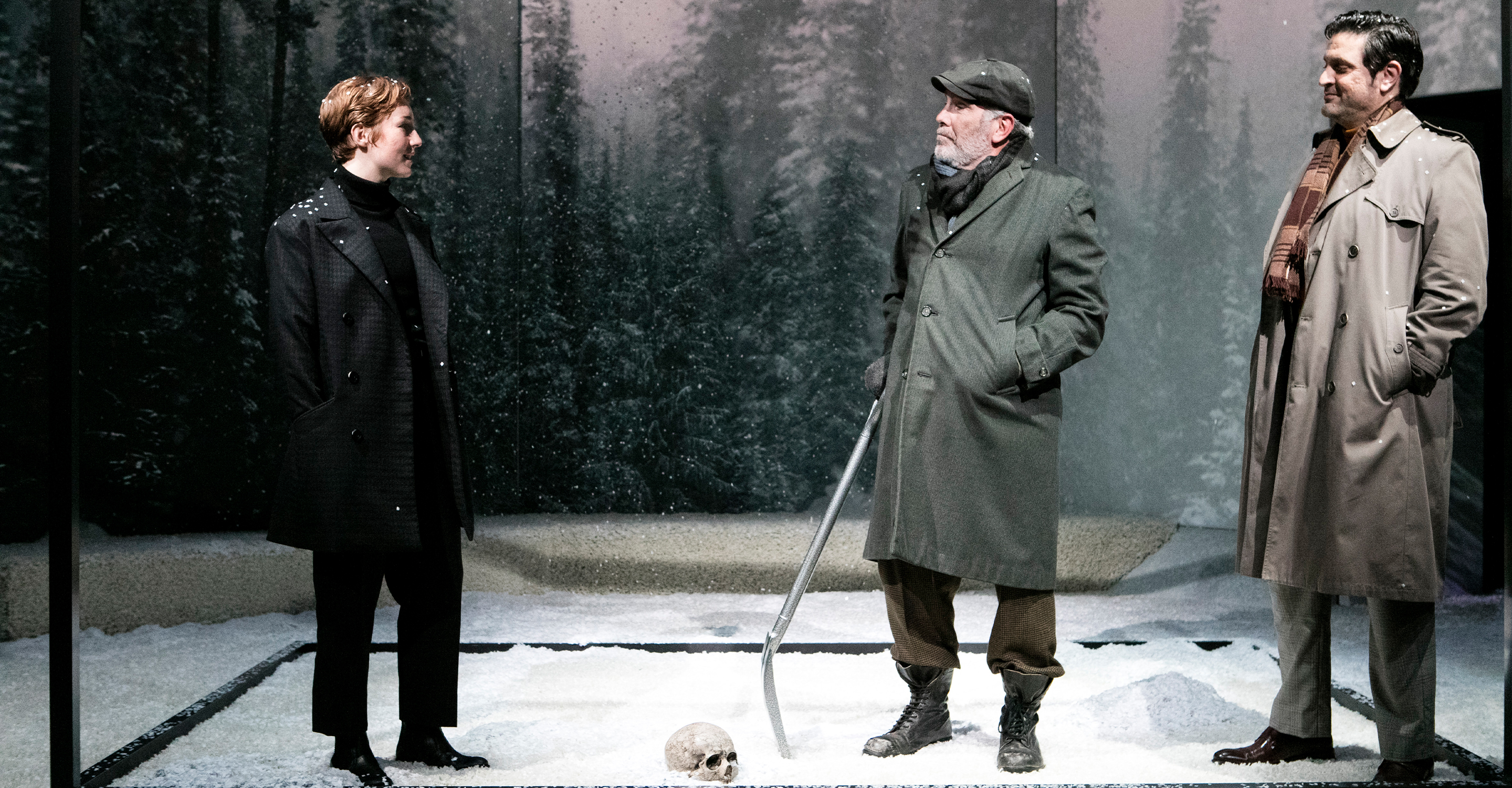 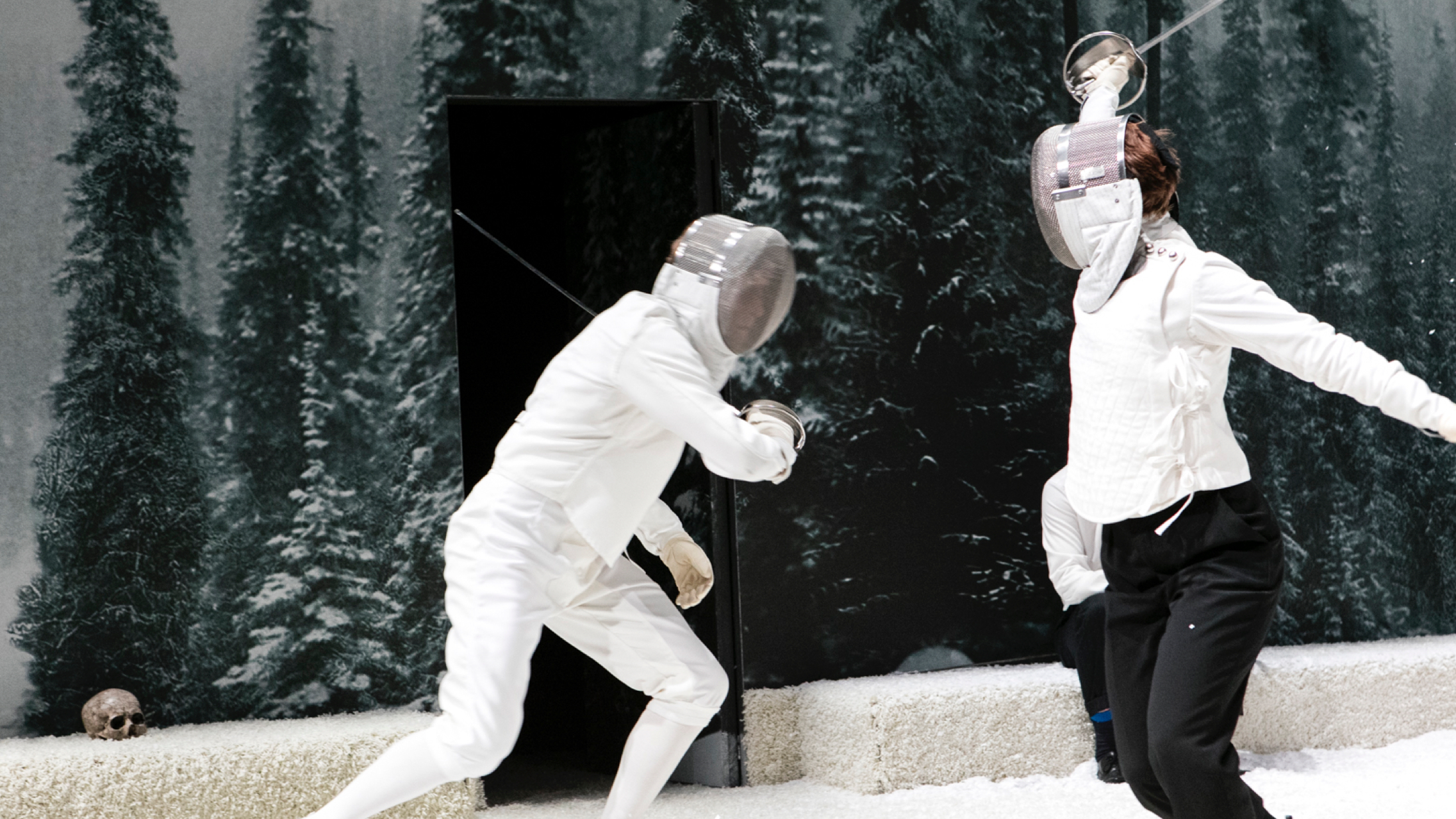 Hamlet was written and performed in the final years of Queen Elizabeth I’s reign.

Perhaps the most commonly debated aspect of the play is Hamlet’s supposed ‘madness.’ Whether Hamlet is putting on a performance to fool those around him, or if he is genuinely losing control of his mind, has been hotly debated for centuries.