Despite the worldwide and ongoing popularity of Shakespeare’s works, surprisingly little is known definitively about the man himself.

This has meant that for centuries people have sought to find details about him within his writing, suggesting that there may be clues to be found to Shakespeare’s opinions or experiences within the plays. It can be exciting to try to piece together the information we have, and speculate based on his own writing. At Bell Shakespeare, we are more interested in investigating and exploring the incredible works that Shakespeare left behind, rather than the circumstances of his life. Yet to do so properly, we do need to understand the society, history and culture of the world in which he was writing.

So, what do we know about William Shakespeare? Here are some key facts about his life and work.

William Shakespeare was born in Stratford-upon-Avon in England in 1564. The town was given this name because it lies on the banks of the River Avon. ‘Stratford’ literally means ‘street that crosses through the river’. ‘Avon’ is simply an old Celtic word for ‘river’. While we don’t know his exact date of birth, it is widely believed to be 23 April (famously the same day that Shakespeare died in 1616, at the age of 52). This is because there is a record of his baptism occurring on 26 April, and children were usually baptised three days after birth.

Shakespeare’s parents were Mary Arden and John Shakespeare. He was one of eight children, only five of whom survived into adulthood. It is important to understand that in Elizabethan England, disease was rampant and life expectancy was much lower than today. This society didn’t have access to modern medicine, sanitation, or even much fresh water. One of the most common diseases was the bubonic plague or ‘Black Death’ which was incredibly painful and had a high rate of spread and mortality. Children were especially susceptible to disease, and in Shakespeare’s time, around 20% of infants died each year. In his biography of Shakespeare, writer Bill Bryson states:

In a sense
William Shakespeare‘s
greatest achievement in life
wasn’t writing Hamlet or the
Sonnets but just surviving
his first year.

In 1582 when he was 18 years old, William married Anne Hathaway. She was eight years older than him and was pregnant with their first child when they married. Shakespeare had three children with Anne: Susanna, and then twins, Judith and Hamnet. The twins are understood to have been named after Shakespeare’s neighbours. We don’t have much information about Shakespeare’s home life, however it is clear that he must have spent a great deal of time working in London in theatre, with Anne at home raising children for substantial periods without him.

Famously, Shakespeare’s will left Anne their “second best bed,” and there has been much conjecture about what this might have meant. However, despite it seeming like a rude gesture, it is likely that it meant quite the opposite. In Shakespeare’s time, it was common for people to save their ‘best bed’ for the use of guests, and so the “second best bed” he references was likely to be Anne and William’s marital bed.

Shakespeare's son, Hamnet, died in 1596 at the age of eleven. His daughter Susanna died in 1649. His youngest daughter, Judith, had three children, but all died before their mother and without children of their own. His granddaughter Elizabeth, daughter of Susanna, died childless in 1670. This means that Shakespeare has no direct descendants.

There is no evidence for what Shakespeare did between 1585 and 1592. This period is known as the ‘lost years,’ and runs from the baptism of Judith and Hamnet, through to Shakespeare’s arrival in London and the commencement of his writing career. There are many theories for what he might have done during this time, including that he was a schoolmaster, a travelling actor, a deer poacher, a soldier, a lawyer’s clerk, or that he travelled to other countries where he gained knowledge for his plays. However, this is all conjecture, and we have no evidential proof of what he did during these years. 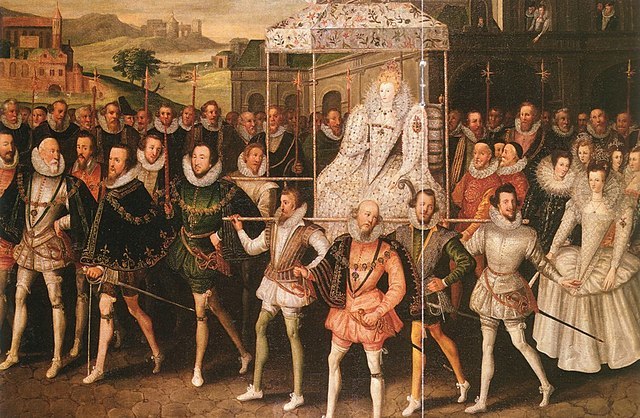 Procession portrait of Queen Elizabeth I

Shakespeare wrote and performed in London during the reign of two different monarchs, Queen Elizabeth I and King James I. Both rulers had significant influence on Shakespeare’s work and plays, and were fans of the theatre. Here are some key insights into the society these leaders created, and the world Shakespeare was living and writing in.

Mary Arden came from a wealthy family, higher in social status than the Shakespeare family. John Shakespeare’s father was a tenant farmer on Mary Arden’s family property, which is how John and Mary met. They married in 1557. John Shakespeare was industrious and had a number of different jobs during his life, including glovemaker, leather worker, wool dealer, ale taster, alderman (a local politician), and even Mayor of Stratford. He was very involved with the town council for many years and was a keen businessman, buying and selling property. However, he lost his fortune and fell on hard times, retreating from public life and council roles. Exactly why this happened is unknown, however we do know that he was in trouble with the law for money lending and illegal wool dealing on multiple occasions. Starting in 1569, John Shakespeare sought a Coat of Arms for his family. He was unsuccessful in gaining this for many years, until he secured one in 1596, probably due to his son’s successful career and standing. The Shakespeare Coat of Arms bears the motto “Non Sanz Droict” or “Not without right”.

William Shakespeare went to school until he was about 14 or 15 years old, like many boys at this time. We don’t know which school he attended, but due to his father’s local standing, it is likely he would have studied at the local grammar school, which was Edward VI Grammar School. Girls were far less likely to go to school or be educated at this time.

William Shakespeare wrote 37 plays and 154 sonnets (a 14-line poem following strict structural rules, traditionally about love). He also wrote two long-form narrative poems, Venus and Adonis and The Rape of Lucrece, which were his first printed works. Many of his works are based on earlier plays, histories, and poems. It was quite common at the time for writers to do this.

His plays were very popular during his lifetime and were performed for Queen Elizabeth I and King James I. Shakespeare is sometimes called ‘The Bard of Avon’ – bard is another word for poet. Although Shakespeare is usually considered an Elizabethan playwright, much of his greatest work was produced after King James I took the throne, so Shakespeare can also be called Jacobean.

Shakespeare moved to London to kickstart his career as an actor and playwright, just as theatre was flourishing and new performance venues were being built. He was an actor as well as a playwright and was a founding member of the Lord Chamberlain’s Men, a company of actors he worked with for twenty years. By 1597, the group leased the first permanent theatre in England which was simply titled ‘The Theatre’, but the owner wouldn’t renew their lease. On December 28 1598, legend has it that the actors and about a dozen workers pulled the theatre apart and later rebuilt it on the other side of the Thames. The new theatre became known as the Globe theatre. It was a round structure with an open, circular roof.

In 1603, Shakespeare's company became the official players for King James I and renamed themselves The King's Men. In 1608, The King's Men moved into the Blackfriar's Theatre, the template on which all later indoor theatres were based.

The last play Shakespeare is believed to have written as sole playwright is The Tempest in around 1610, though he contributed to other plays after that, including the plays King Henry VIII and The Two Noble Kinsmen.

The Globe theatre burned to the ground in 1613 during a performance of Henry VIII. A real cannon was used for special effects, which set fire to the thatch roof.

In addition to being a great artist, Shakespeare was also a shrewd businessman. He made a decent income from his work in theatre, and invested in land and property, and was a grain merchant.

In 1616 Shakespeare revised his will. His signatures are shaky, suggesting that he may have been sick. He died on 23 April 1616, aged 52.

In his will Shakespeare left money for his friends, actors John Heminges, Henry Condell and Richard Burbage, to buy ‘mourning rings’. Whether they actually bought the rings is unknown but we do know that they spent a substantial amount of money to honour Shakespeare in a very special way. Heminges and Condell were instumental in publishing Shakespeare’s plays for the first time in one large book after his death. The published book is now known as the First Folio, and it was printed in 1623. At the time, printing was an expensive and laborious process. Not many people could read, let alone afford to buy books. If Heminges and Condell had not published the First Folio, an astonishing 18 of Shakespeare’s plays would have been lost, as there was no previous record of them. These include major plays such as Macbeth and The Tempest.

It is believed that 750 copies of the First Folio were printed, and 235 are known to still be in existence. Every few years, a new copy is discovered somewhere in the world. The Folger Shakespeare Library in Washington DC, USA has the largest collection, with 82 original First Folios. The State Library of NSW holds one First Folio, the only copy in Australia.

Shakespeare’s greatest legacy is largely one of language. Shakespeare's plays contain the first-ever recordings of over 2,000 English words, including bump, bubble, manager, organ, relevant, critical, excellent, assassination, and countless more, including the word countless! Hundreds of phrases, now commonly used by us in our modern speech, are from Shakespeare’s plays. These phrases include ‘one fell swoop’, ‘vanish into thin air’, ‘play fast and loose’, ‘in a pickle’, ‘foul play’, ‘tower of strength’, ‘flesh and blood’, ‘cruel to be kind’, and ‘wild goose chase.’ In fact, The Oxford Dictionary of Quotations says that Shakespeare wrote about one-tenth of the most quotable quotations ever written or spoken in English.

Shakespeare is buried in the Holy Trinity Church in Stratford-upon-Avon. The stone over his tomb includes the following inscription, believed to have been written by Shakespeare himself:

Good friend,
for Jesus' sake forebeare
To dig the dust
enclosed heare;
Bleste be the man that
spares thes stones,
And curst be he that
moves my bones.