We are such stuff
as dreams are made on...

Prospero, the Duke of Milan, allows his kingdom to fall into the hands of his ruthless brother Antonio.

With the help of Alonso, King of Naples, Antonio sends Prospero and his young daughter Miranda to sea, to certain death. Miranda and Prospero find safety on a seemingly uninhabited island. For 12 years Prospero rules over the island and its inhabitants and masters the art of magic in the hope that an opportunity for revenge will arise.

With the help of his captive sprite, Ariel, Prospero raises a tempest, which shipwrecks Antonio, Alonso and other Italian nobles on the island. Prospero torments his usurpers, and Miranda falls in love with Alonso’s son, Ferdinand. After Prospero reveals himself as the puppet-master of the ploy, Alonso repents his behaviour and Antonio faces his comeuppance. Prospero sets Ariel free, forgoes his magic and returns to Milan.

Thought to be Shakespeare’s last play as sole playwright, The Tempest is an experiment in form and style that features music, magic and the most stage directions of any of his plays. The play is often thought to be autobiographical, and when Prospero gives up his magic in the final act, many audiences believe this to be Shakespeare’s artistic farewell.

I have suffered
With those that I saw suffer...

A ship out at sea is caught in a terrifying storm. On board, along with the ship’s crew, is the King of Naples, Alonso, his son Ferdinand, the Duke of Milan, Antonio, and their companions. The ship is wrecked.

Watching from a nearby island, a young girl named Miranda wonders if the storm has been created by her father, Prospero, knowing he is a magician with powers capable of such a thing.

Prospero then reveals to Miranda that he was once Duke of Milan, until his brother Antonio, aided by Alonso, usurped his Dukedom and put Prospero and Miranda to sea, to certain death.

He recalls how the noble Gonzalo assisted them with food, water and Prospero’s books, before they washed up on the shore of this island, deserted except for Caliban (son of the witch Sycorax, who had died), and the spirit Ariel, whom Sycorax had trapped.

Prospero then uses magic to make Miranda sleep, and the magical Ariel, Prospero’s spritely servant, arrives. We learn that Prospero instructed Ariel to raise the storm, and that while the ship was wrecked, all on board are safe and well. Ariel has distributed them all around the island.

Ariel asks Prospero for his freedom, stating his loyal service without complaint. Prospero reminds him that it was he who freed Ariel from the wrath of Sycorax, but promises to release Ariel in less than two days. Then we meet Caliban, a native of the island who Prospero has enslaved. Prospero orders Caliban to do his bidding, but Caliban refuses, claiming that he is the rightful inhabitant of the island. Prospero then threatens Caliban and sends him to fetch firewood.

Ariel uses music to enchant and lure Ferdinand, Prince of Naples, so that Miranda and Ferdinand can meet for the first time. Miranda is amazed at seeing another person, and the two are utterly captivated with each other, which pleases Prospero.

What have we here? A man or a fish? Dead or alive?

Across the island, King Alonso, his brother Sebastian, Prospero’s brother Antonio, and the wise old counsellor Gonzalo, fear that Ferdinand has drowned. Ariel enters, invisible, and uses magic to put Alonso and Gonzalo to sleep, leaving Antonio and Sebastian awake. Antonio urges Sebastian to murder the sleeping Alonso and take his kingdom, but Ariel wakes Gonzalo in time to foil the plan. Ariel says he will tell Prospero what has just happened.

Elsewhere, Caliban is collecting wood for Prospero when he encounters Trinculo, King Alonso's court jester. Caliban thinks Trinculo must be a spirit that Prospero has sent to torment him, and so takes cover and hides under his cloak. Trinculo is confused by the hidden shape of Caliban, wondering if it is a man or a fish. When thunder strikes, Trinculo is startled and decides to hide under the cloak as well. Stephano, a drunken butler, then arrives singing and is equally confused by the hidden shape before him. Caliban believes there are now multiple spirits tormenting him, and Stephano decides that giving Caliban some of his liquor will help soothe him. Soon enough, the three realise their errors and drink and sing together, Caliban enjoying the liquor a little too enthusiastically. Stephano declares himself king of the island and Caliban swears allegiance to him, hoping he will assist in overthrowing Prospero.

I would not wish
Any companion in the world but you...

Prospero has Ferdinand prove his worth by carrying heavy logs of wood. Miranda watches on and pities Ferdinand, who insists she is worth the hard labour. The two share their feelings for each other, swearing their love. Miranda proposes marriage and Ferdinand accepts joyfully. Unbeknownst to them, Prospero has watched the entire scene and is pleased at this news.

Meanwhile Trinculo, Stephano and Caliban get drunk and plot to attack Prospero. Caliban shares his plans to surprise Prospero when he is asleep and kill him. Stephano agrees to the plan, saying that he will become king of the island and make Miranda his queen. Now invisible, Ariel observes them and is appalled. Ariel intervenes in their conversation, imitating their voices and causing them to quarrel, vowing to report everything to Prospero. Ariel plays some enchanting music, which distracts the three from their plotting, and they follow the sound.

King Alonso, Sebastian, Antonio and Gonzalo are now very weary and stop to rest. A magical banquet is placed before them. They ponder whether they should eat the food, but before they can, Ariel appears as a harpy and the banquet vanishes. Ariel angrily reminds them of the wrong they have done to Prospero, and says this is the reason that Ferdinand has been taken. Ariel then disappears, leaving the men amazed and King Alonso processing his guilt.

Then, as my gift and thine own acquisition
Worthily purchased take my daughter...

Prospero arranges a magic masque, bringing in spirits in the form of the goddesses Iris, Ceres and Juno to celebrate Ferdinand and Miranda’s betrothal. However Prospero abruptly calls the ceremony off when he remembers that he has yet to deal with Caliban and his co-conspirators, in regards to the plot against his life. Ferdinand and Miranda are confused at Prospero’s sudden passion and preoccupation. Prospero tells Ariel that it is now time to take revenge, and instructs him to remain invisible.

Ariel lures Caliban, Stephano and Trinculo towards Prospero’s cell, distracting them with a display of rich garments, which they steal. Prospero and Ariel then frighten the men with magical hounds, which chase them away.

As you from crimes would pardon'd be,
Let your indulgence set me free.

Prospero acknowledges that his plan is almost coming to an end. He asks Ariel for a report on King Alonso and his men, and Ariel tells him of their sorry state. Prospero vows he will give up his magical powers once he has completed his plan, and free Ariel. He decides to forgo revenge, and instead forgive those who did him wrong.

Prospero has Ariel lead the lords to him and entrance them in a circle. Prospero reveals himself to King Alonso, welcomes the good Gonzalo, offers to forget Sebastian’s plotting, and requires of Antonio that his Dukedom be returned. He then reveals that Ferdinand is alive, showing him to be safe and playing chess with Miranda. Alonso is overjoyed to be reunited with his son and hear news of his recent betrothal.

Next, Prospero orders Ariel to fetch Caliban, Stephano and Trinculo. Caliban swears he will no longer disrespect his master. They prepare the ship to sail towards Italy. Finally, Prospero grants Ariel his freedom, renounces his magic, and asks the audience to set him free with their applause. 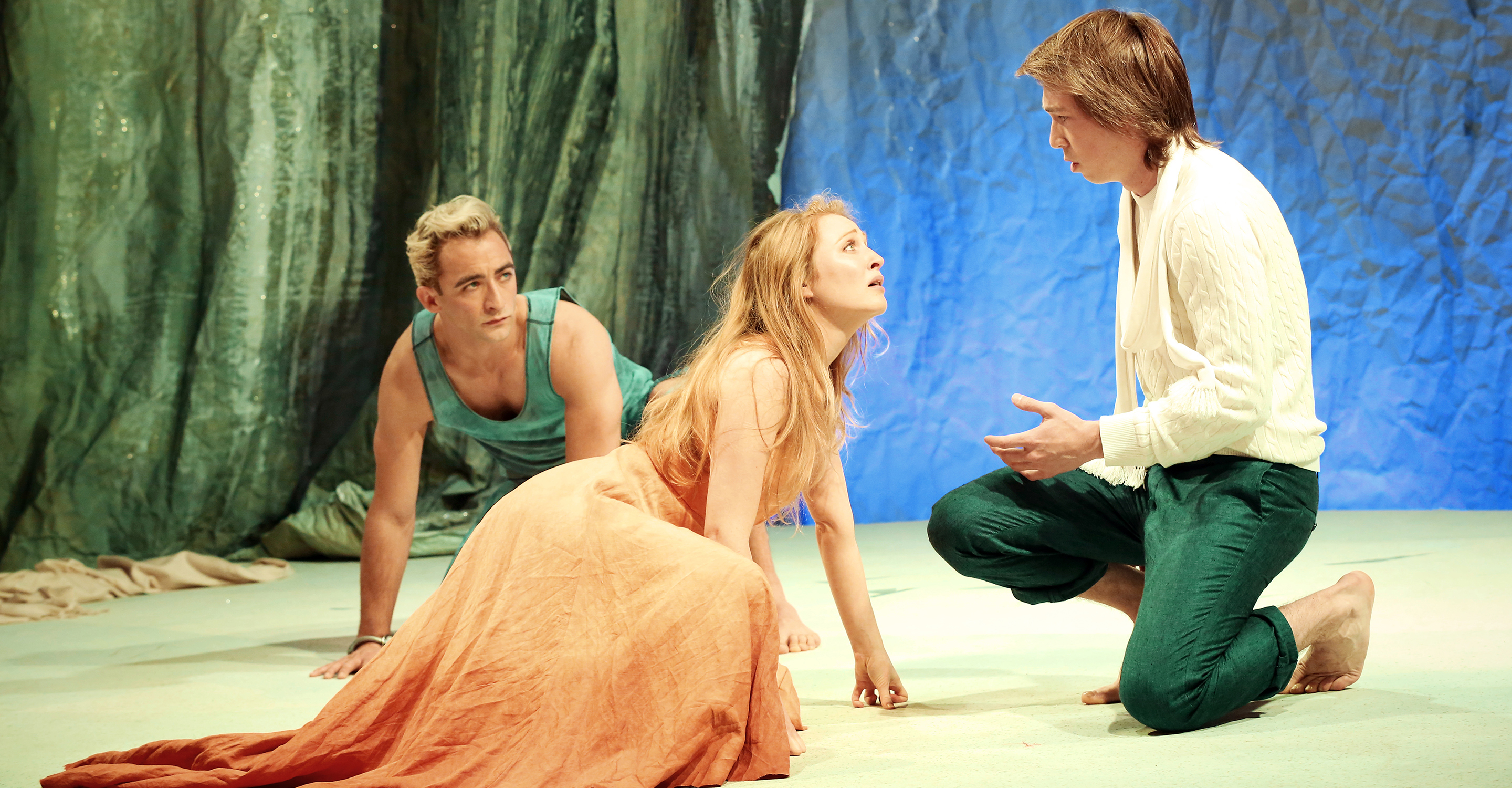 O brave new world,
That has such people in’t! 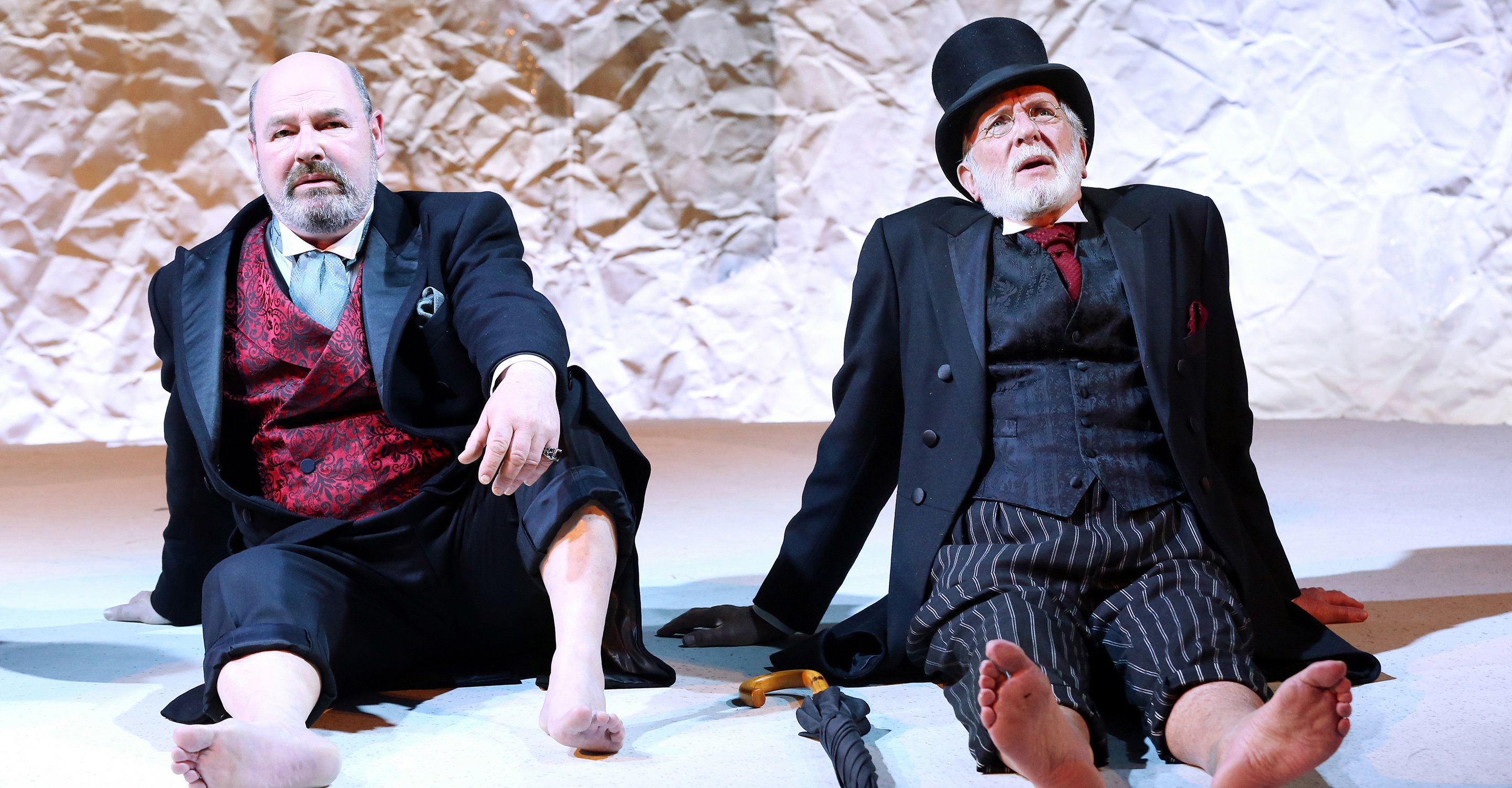 The Tempest was most likely written around 1610-1611, during the reign of King James I, and is often considered the last play Shakespeare wrote as the sole playwright.

The Tempest has more music in it than any other Shakespeare play.

Is The Tempest Shakespeare's final farewell?

As Shakespeare wrote the play towards the end of his career there has been much discussion over its autobiographical nature. Some believe it was Shakespeare’s way of saying goodbye to his art and beloved audiences.

Despite the lyrical and poetic beauty of the play, it is impossible to ignore the fact that the play’s reception over time, and the conversation surrounding it, has been altered by ever-changing racial theories and evolving cultural awareness.

Read about The Post-colonial Tempest