Am I in earth, in heaven, or in hell?

Egeon, a merchant of Syracuse, and his wife, Emelia, have twin boys both called Antipholus.

They adopt another set of twin boys, both called Dromio, to serve their sons. When a shipwreck separates one Antipholus and Dromio from the other, and the parents from each other, the family starts new lives in different cities, not knowing the fate of their loved ones.

Years later, as adults, Antipholus and Dromio of Syracuse set out to find their brothers who they have heard live in Ephesus. Anxious for their safety, Egeon follows them but is arrested due to a conflict between Ephesus and Syracuse. He is given one day to raise a sum of money as a fine, or he will be executed under Ephesian law. Over the course of one day in Ephesus, confusion reigns and a farcical chaos ensues, before the entire family is once again reunited.

The Comedy of Errors is one of Shakespeare’s first and shortest plays, and shows his early experimentation with mistaken identity and wordplay. Despite its comically slapstick style, the play explores issues of displacement, familial separation, grief and class structure.

So I, to find a mother and a brother,
In quest of them, unhappy, lose myself.

Egeon, an old merchant from Syracuse, has arrived in the city of Ephesus. The two cities are at war, and because of a law that forbids Syracusan merchants from entering Ephesus, Egeon is told he will be put to death. Duke Solinus tells Egeon that he may only escape execution if he pays a fine of 1000 marks, which Egeon does not have. The Duke asks Egeon why he came to Ephesus, and he shares the story of his life. Years ago, Egeon and his wife had twin sons, both named Antipholus. They adopted another set of twin boys born of a very poor mother, both called Dromio, to serve their sons. Yet in a shipwreck, Egeon was separated from his wife, one of his sons, and one of the servants. He brought up the son and his servant, yet never heard of the fate of the other twins and his wife.

At eighteen years of age, his son became increasingly interested in finding his lost brother, as did the servant Dromio for his brother. Antipholus and Dromio of Syracuse set out to find their brothers, but when they did not return, Egeon went in search of them.

Duke Solinius is greatly moved by Egeon’s story, but cannot amend the laws of Ephesus. In a show of pity, he grants Egeon 24 hours to raise the sum of 1000 marks, and promises to grant him his life if he can raise the money in time.

This same day, Antipholus and Dromio of Syracuse arrive in Ephesus. Antipholus sends Dromio to take money to an inn, and as he starts to explore the town is met by Dromio of Ephesus. Mistaking him for his own servant, Antipholus enquires about the money and his errand, to which Dromio of Ephesus denies all knowledge and pleads that Antipholus return home to his wife. Antipholus beats Dromio who quickly takes his leave, and decides to head to the inn to check on his money.

Am I in earth, in heaven, or in hell?
Sleeping or waking, mad or well-advised?

At the house of Antipholus of Ephesus, his wife Adriana and her sister Luciana wonder why Antipholus has not returned home. Adriana is increasingly impatient while Luciana insists that men have more liberty to do as they please. Adriana bemoans the liberty of men, while Luciana adheres to more subservient marriage views.

Dromio of Ephesus returns home, but his news that his master would not follow him, nor admit that he had a wife, enrages Adriana. She is convinced her husband is meeting with other women, and Dromio’s news seems to confirm this. Adriana tells Luciana that her husband promised to give her a gold chain, made by the goldsmith Angelo, and that would be proof of his love for her.

Antipholus of Syracuse confirms that his money is safe at the inn, before meeting back with Dromio of Syracuse. Antipholus wonders if Dromio has any more jokes about wives and not knowing about his money, to which Dromio is completely confused. Antipholus beats him in annoyance.

Just then, in walks Adriana and begins berating Antipholus and addressing him as her husband. Luciana joins in, asking why he didn’t come home for dinner after they sent Dromio for him. Both Antipholus and Dromio of Ephesus deny any knowledge of the women, the events they speak of, and say they have only been in Ephesus for two hours. Antipholus and Dromio agree that all this confusion must be the work of magic and witchcraft. On the women’s insistence, the men go with them, Antipholus to eat dinner, and Dromio to guard the door.

O villain! thou hast stolen both mine office and my name.

Antipholus of Ephesus heads home to have dinner with his wife, with his servant Dromio in tow. On arrival at home, they find the door is being guarded by an unseen Dromio of Syracuse, who refuses to let them enter. In the scuffle, Luciana calls out to insist they go away. Antipholus of Ephesus threatens to beat the door down, at which point Adriana enquires what is going on. When Antipholus announces that he is her husband, she brushes him off, further enraging him. Antipholus decides instead to dine with a local courtesan he has a relationship with, and to spite his wife, says he will give the gold chain he has had made for Adriana, to the courtesan instead.

Back inside the home of Antipholus of Ephesus, Antipholus of Syracuse has met and fallen for Luciana. She is flattered by his advances but, thinking he is her sister’s husband, reproaches him for his behaviour. He declares that they should be husband and wife, confusing Luciana. She leaves to get Adriana. In walks Dromio of Syracuse, who tells his master that he has just discovered that he has a wife, one of the kitchen maids. The two decide to leave town that night, to escape all the strangeness.

Just then, Angelo the goldsmith enters with the gold chain. He hands it to a confused Antipholus of Syracuse who says he did not ask for such a chain to be made. Nevertheless, Antipholus accepts the chain and Angelo says he will come back for his money at dinner time.

… here we wander in illusions:
Some blessed power deliver us from hence!

As Antipholus is being led away by the officer, in walks Dromio of Syracuse who says he was told to hire a ship, not buy a rope. Antipholus orders him to go back home and get money for bail from Adriana.

Dromio of Ephesus returns with the rope and hands it over to Antipholus of Ephesus who is being held by the officer. Antipholus is enraged and demands to know what happened to the bail money, to Dromio’s confusion.

After so long grief, such festivity!

Angelo and a merchant spy Antipholus of Syracuse wearing the gold chain around his neck, and approaches him furious. When Antipholus says he never denied having the gold chain, Angelo draws his weapon and they prepare to fight. Adriana, Luicana and the Courtesan arrive and insist they do not fight because Antipholus is mad. Antipholus and Dromio of Syracuse escape into a nearby priory to seek refuge, and the Abbess of the priory grants them sanctuary. Adriana pleads that the ‘mad’ Antipholus come home, but the Abbess is determined to protect and rehabilitate him.

Just as Adriana decides to plead her case to Duke Solinus, in walks the Duke with Egeon, who has failed to raise the 1000 marks and is to be executed. Adriana calls out to the Duke and shares her story. Into this scene walks Antipholus and Dromio of Ephesus, confounding everyone who thought they were inside the priory. Egeon notices his son immediately.

Antipholus of Ephesus tells the Duke that his wife has dishonoured him by shutting him out of home, yet Adriana insists they dined together, which Luciana backs up. Angelo and the Courtesan also share their part in the confused events. Duke Solinus, thoroughly perplexed, calls for the Abbess.

Egeon asks the Duke if he may speak, and approaches Antipholus and Dromio to see if they recognise him. They have no recollection of Egeon, and deny his claims that he is Antipholus’ father, from Syracuse. At this moment, the Abbess emerges from the priory with Antipholus and Dromio of Syracuse. All can now see standing before them two sets of identical twins. Antipholus and Dromio of Ephesus instantly recognise Egeon, as does the Abbess, who announces that she is Emelia, Egeon’s long lost wife. Emelia shares that she is the mother of the Antipholus twins, yet got separated from them after the shipwreck. All involved realise that the confused events of the day were due to the two sets of twins, and the separated family, who are finally reunited. 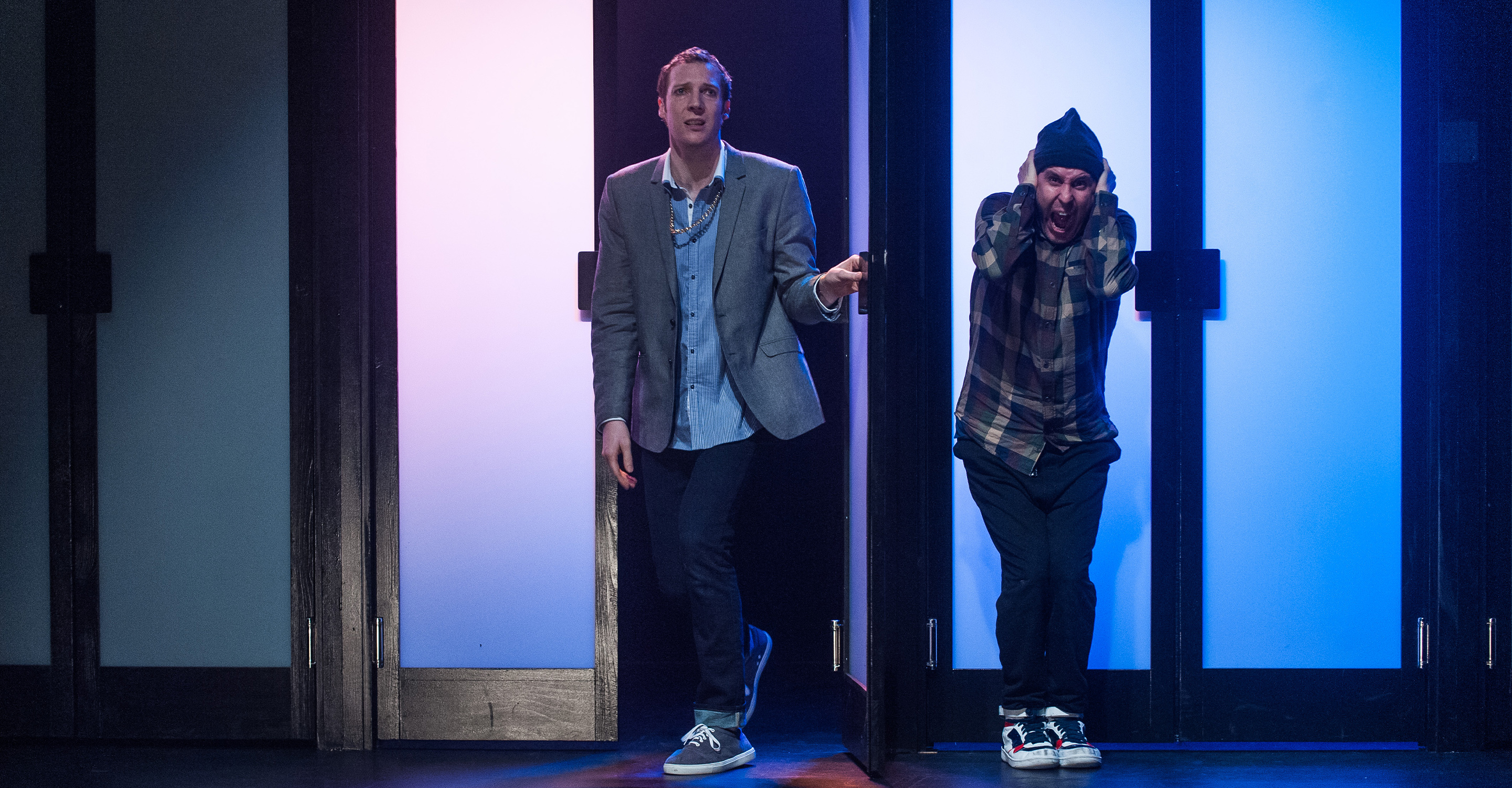 I to the world am like a drop of water
That in the ocean seeks another drop... 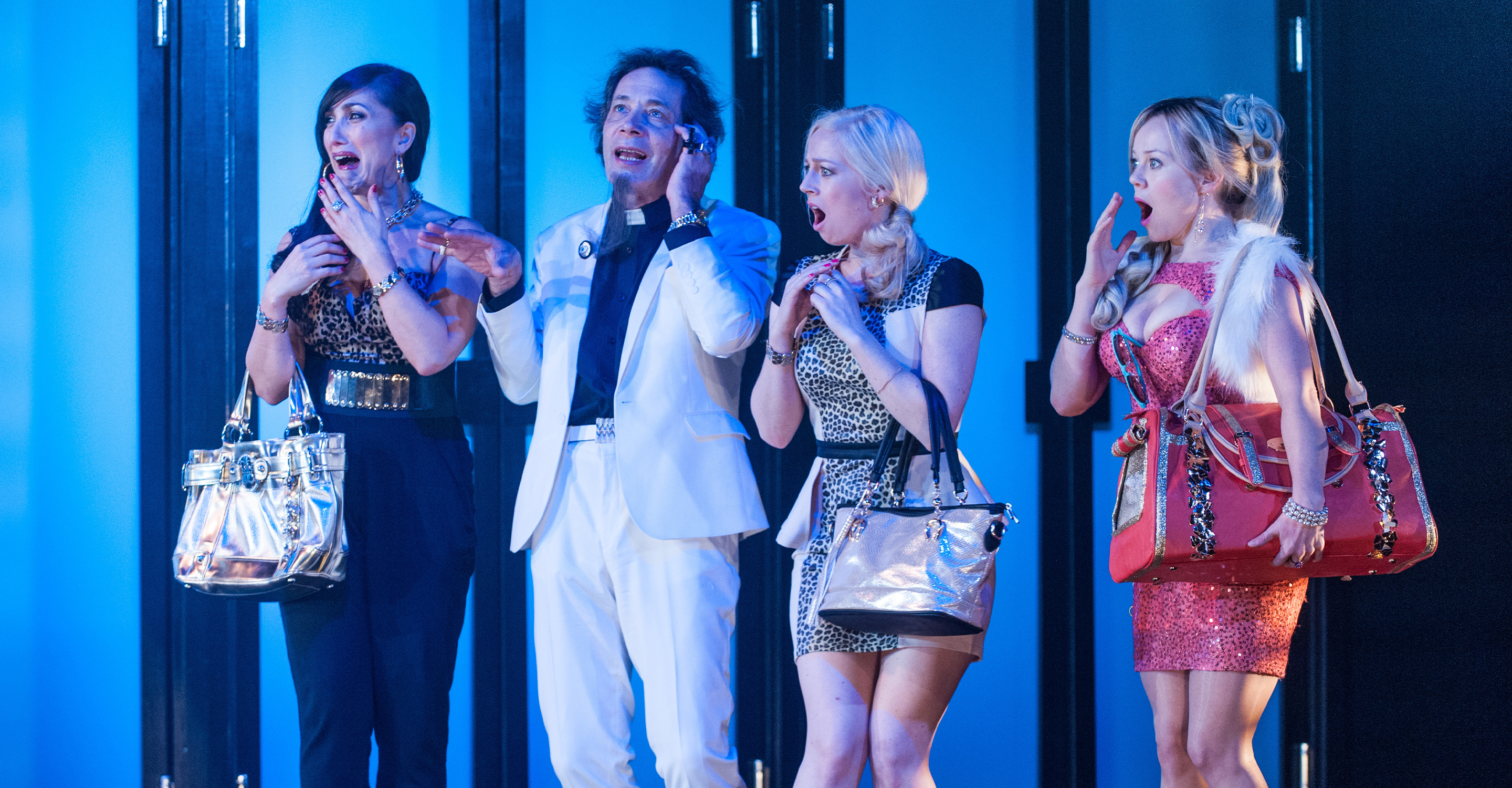 The Roman playwright Plautus and his play Menaechmi are the main sources of Shakespeare’s The Comedy of Errors.

The Comedy of Errors is believed to be Shakespeare’s shortest play at just 1,777 lines. Hamlet speaks almost this many lines by himself.