Some Cupid kills with arrows, some with traps.

Love is in the air in Messina when Don Pedro and his men return victorious to spend a month at the home of the Governor, Leonato.

Leonato’s niece Hero has caught the eye of a young soldier, Claudio, and the careful process of their courtship is set in motion. At the same time Beatrice, who has sworn against love forever, and Benedick, confirmed bachelor, are reunited and resume their accustomed sparring. Their friends see through their cynicism, however, and in a series of staged conversations convince Beatrice and Benedick that they are desperately in love with each other.

The course of love is interrupted when Don John, the bitter half-brother of Don Pedro, and his followers concoct a plan to deceive Claudio into believing that Hero has been unfaithful. Claudio publicly shames his bride-to-be and allegiances are destroyed over questions of honour and integrity.

True to comedic form, the couples are reunited and the villain gets his comeuppance, but Shakespeare brilliantly leaves the audience in a quandary over the foundations of the various relationships in the play and the nature of true love.

I had rather hear my dog bark at a crow than a man swear he loves me.

Don Pedro, the Prince of Aragon, has been at war to put down an uprising by his half-brother, Don John. The two princes agree to a truce, and Don John reluctantly joins Don Pedro to travel to the home of Leonato, the Governor of Messina, Sicily. There they plan to stay for at least a month of rest and relaxation. Travelling with them are Count Claudio of Florence, a young soldier, and Benedick of Padua, a more seasoned campaigner. Benedick is a confirmed bachelor but has some history in Messina with Leonato’s niece, Beatrice. As soon as the soldiers arrive, Beatrice and Benedick quickly resume their battle of wits. Claudio is instantly smitten with Leonato’s daughter Hero which he confides in Benedick, who mocks him for even considering becoming a husband.However, Don Pedro endorses the match and agrees to help Claudio woo Hero. That evening there is to be a masquerade ball and Don Pedro suggests that he woo Hero on behalf of Claudio and then seal the deal with her father, Leonato.

In the first of many moments of misheard gossip in this play, Antonio, Leonato’s brother, tells Leonato that he has heard that Don Pedro is in love with Hero and plans to woo her for himself at the party. Leonato wisely replies that he will believe it when he sees it, but that he will tell Hero about this news so that she can be prepared.

Conversely, Borachio, one of Don John’s henchmen, has also overheard, understands the plan perfectly well and brings news of it to Don John. Determined to get some revenge on his brother and fulfill his self-proclaimed role of villain, Don John decides to use this intelligence to cause mischief.

Speak low, if you speak love.

At the party the male guests are masked which, they believe, hides their identities. Beatrice takes advantage of this as she dances with Benedick, perhaps only pretending not to recognise him, telling him how little everybody thinks of him and his behaviour. Benedick is stunned and later begs Don Pedro to send him away so he no longer has to be in the presence of Beatrice.

Don Pedro keeps his promise to Claudio and sets about wooing Hero on his behalf, but Don John convinces Claudio that Don Pedro is actually wooing Hero for himself. Claudio is all too easily convinced that his friend would betray him, but things are quickly smoothed over when Don Pedro assures Claudio that Hero has agreed to marry him, and her father consents for the young pair to be married the following Monday.

To pass the time before the wedding, Don Pedro decides to trick Benedick and Beatrice into falling in love with each other. With the help of Leonato, Claudio, Hero and Ursula, Hero’s maid, Don Pedro sets up a plan for Benedick and Beatrice to overhear conversations about how much the other loves them. The next morning Don Pedro, Claudio and Leonato plant themselves somewhere where they know Benedick will be able to overhear them, and begin to have a conversation about Beatrice’s love for Benedick. The eavesdropping Benedick takes the bait and undergoes an incredible transformation from confirmed bachelor to determined lover, saying that he will marry Beatrice.

Don John is determined to spoil the wedding of Claudio and Hero and plans a cruel deception of his own. He and Borachio concoct a scheme whereby Borachio will make love to Margaret in the window of Hero’s bedroom. He tells Don John to bring Don Pedro and Claudio to below Hero’s window where they will hear Borachio call Margaret ‘Hero’ and see a woman that they will think is Hero being unfaithful to her future husband.

Some Cupid kills with arrows, some with traps.

Hero, Ursula, and Margaret set about fooling Beatrice similarly to how Benedick was fooled by his friends. They manufacture a situation where Beatrice can overhear them talking about Benedick’s love for her. She is as shocked as he was, but she acknowledges that he is worthy of love and vows to love him back.

Don John puts his plan into action and approaches Don Pedro and Claudio, telling them that Hero is unfaithful. He says he has proof and that they should go with him tonight where they will see evidence of her with another man. Later that evening The Watch, a group of local policemen, are preparing for the night patrol. They overhear Borachio bragging to Conrade about how he and Don John have successfully deceived Claudio and Don Pedro, and that Claudio is planning to publicly humiliate Hero at the wedding ceremony the next morning. The Watch arrest Borachio and Conrade and take them away for questioning.

In the morning the bumbling leaders of the Watch, Dogberry and Verges, try to intercept Leonato on his way to the wedding and tell him about Borachio and Conrade, but they are so inarticulate and long-winded that he dismisses them, saying that this is an incredibly busy day.

There, Leonato, take her back again:
Give not this rotten orange to your friend...

The planned wedding is a disaster. Claudio, with the support of Don Pedro, humiliates Hero and accuses her in front of everyone of sleeping with another man. Hero collapses in shock upon hearing the story of her apparent unfaithfulness, and her father wishes her dead. Hero is deserted with only her cousin Beatrice and the Friar left with any faith in her honour. The Friar proposes a plan for Leonato to tell everyone that Hero has in fact died of shock in the hope that this will force her accusers to acknowledge that they may have been wrong. After Hero is taken away, Benedick confesses his love for the now distraught Beatrice, and she admits she feels the same way about him. When Benedick says he would do anything to make her happy, Beatrice asks him to kill Claudio.

Meanwhile, Dogberry and Verges have finally managed to get the truth out of Borachio and Conrade. Borachio admits that he plotted with Don John to fool Claudio and wreck the wedding. He and Conrade are taken to face Leonato.

And when I lived, I was your other wife:
And when you loved, you were my other husband.

No longer believing that his daughter was unfaithful, Leonato is heartbroken and furious. He challenges Claudio to a duel for wrongfully accusing Hero and destroying her reputation. Benedick also confronts Claudio not only with another challenge but with the news that Don John has fled Messina. When Dogberry and Verges return with Borachio, and he confesses to his part in the set up of Hero, Claudio and Don Pedro realise that they have made a grievous error and beg Leonato for forgiveness. They believe they have been responsible for Hero’s death and say they will do anything to make amends. Leonato makes two demands: that Claudio must write an epitaph to sing at Hero’s tomb, and that Claudio must marry Leonato’s niece whom Claudio has not met but who is strikingly similar to Hero. Plans are made for a second wedding.

Benedick returns to Beatrice to assure her that he has challenged Claudio’s life in order to avenge her cousin, and prove his love for her, but both are relieved to receive news that Don John’s treachery has been revealed.

Claudio spends the morning of his second wedding at Hero’s tomb. He fulfils his promise to Leonato by singing her epitaph before preparing to marry her suspiciously similar looking cousin.

At the wedding Hero stands before Claudio in a veil. He vows to marry her and then is shocked when she unveils and is, in –fact, Hero. Hero’s name is cleared and Claudio is forgiven. In the midst of the joy, Benedick publicly asks Beatrice if she does in fact love him. She denies it, and so he in return denies loving her. They are exposed however when their friends produce love poetry that each has written about the other. Beatrice and Benedick finally admit their love for each other publicly, and agree to be married. At the last moment a messenger arrives with news that Don John has been arrested and brought back to Messina, but Benedick implores Don Pedro to leave those concerns until tomorrow so that they may enjoy the festivities of a double wedding. 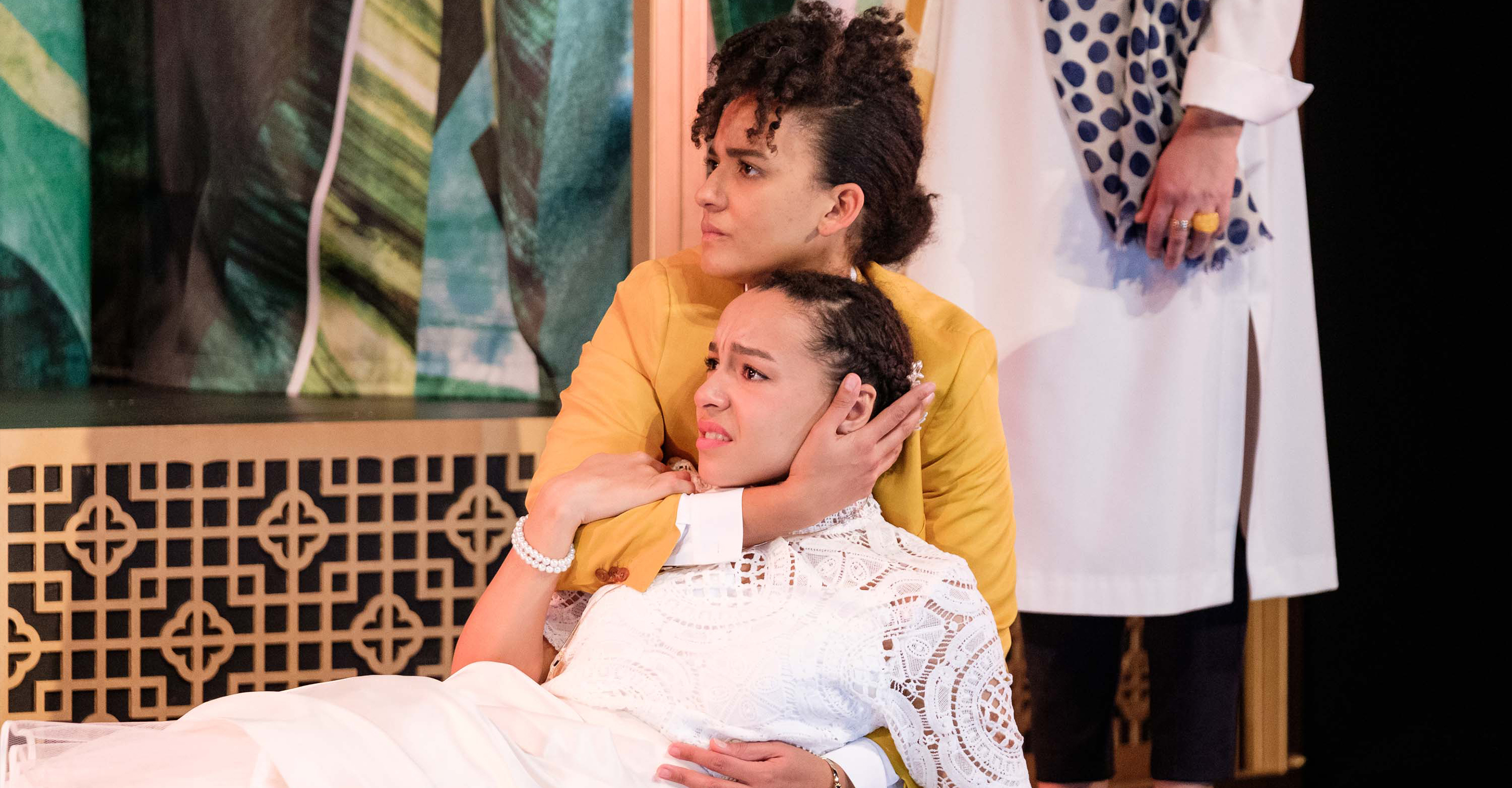 O God, that I were a man! I would eat his heart
in the marketplace. 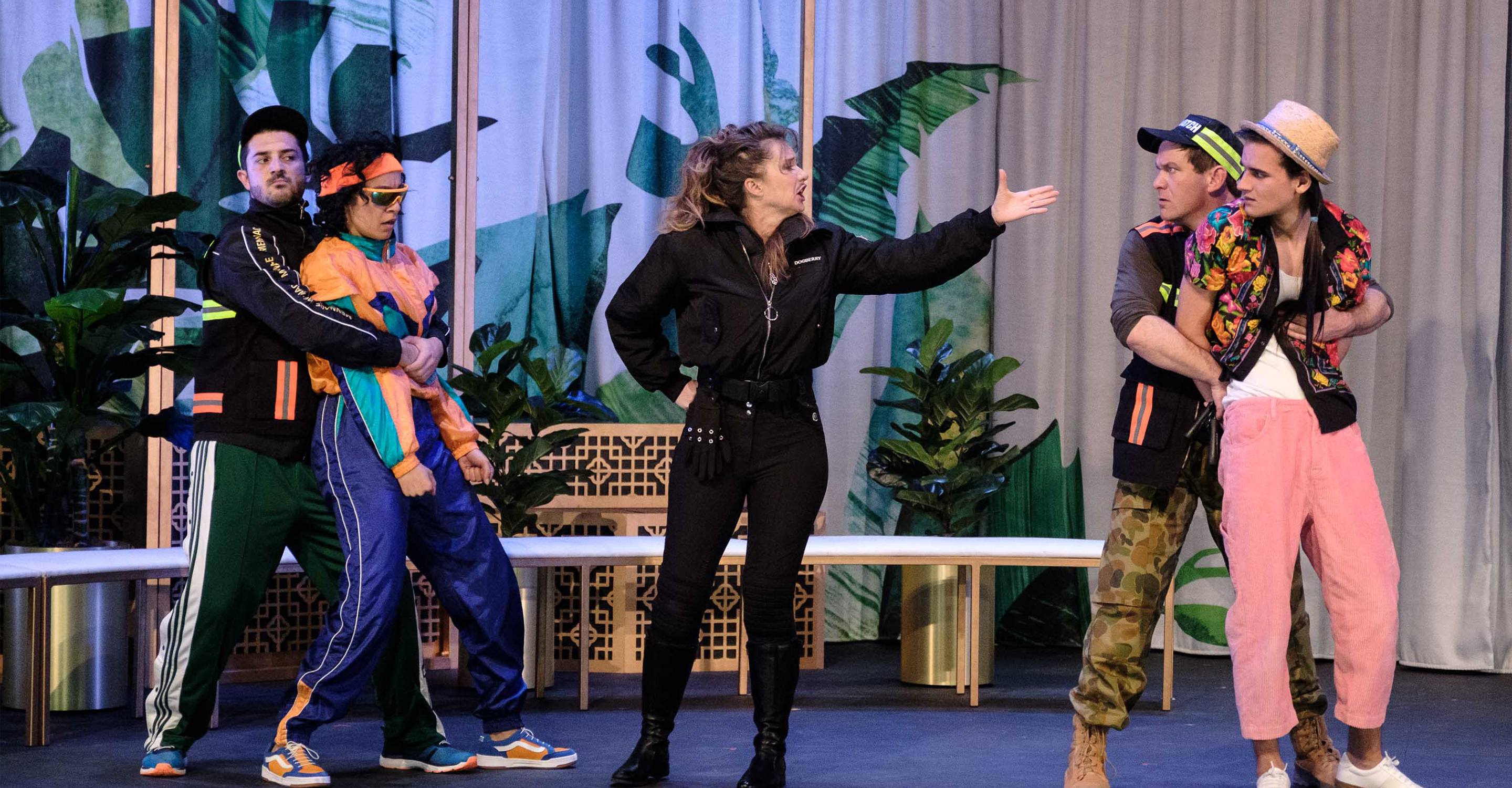 Much Ado About Nothing is by far the most prose-heavy play that Shakespeare wrote.

Only a quarter of the lines are in verse.

Should Claudio be forgiven so easily?

After making such a public, cruel, unfounded accusation, it comes as a surprise that Claudio is not only forgiven, but reconciles with Hero so swiftly.